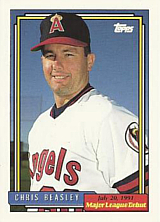 Chris Beasley was drafted three times. He was originally drafted by the Chicago White Sox in the 6th round of the January 1982 amateur draft, but did not sign. He was drafted by the California Angels in the 27th round of the regular draft in 1983, and again did not sign. He finally signed with the Cleveland Indians after being drafted in the ninth round of the 1984 draft. A star pitcher for the ASU Sun Devils, Beasley played in the 1983 and 1984 College World Series as well as for the school's basketball team.

In 1991, Beasley spent about half the season in the minors and half in the majors. He went 3-5 with a 5.26 ERA for the Trappers in the minors. On July 20, he made his big league debut, pitching against his former organization, the Cleveland Indians. He worked one inning in his big league debut, allowing a walk and no earned runs. He recorded his first career strikeout in that game as well. Overall, Beasley went 0-1 with a 3.38 ERA in 22 big league games, giving up 10 earned runs on 26 hits and 10 walks while striking out 14 in 26 ⅔ innings of work. He played his final game on September 29.