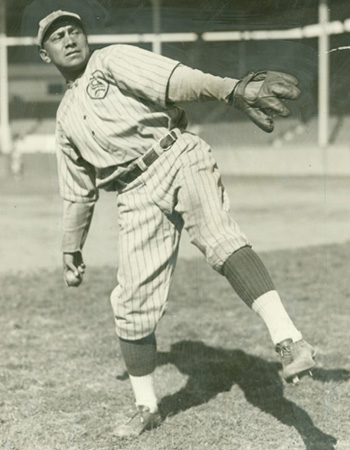 Chief Yellow Horse, from Pawnee, OK, pitched in the major leagues for the Pittsburgh Pirates in 1921 and 1922. His given first name was "Moses". He is believed to have been the first full-blooded Native American to play in the major leagues, as others were apparently not full-blooded. He had a rather dark complexion, but because he was unambiguously Native American, Commissioner Kenesaw Mountain Landis supported his being signed to a major league team even though the color line was in full effect at the time.

With a lifetime record of 8-4, he was pretty successful, although his ERA was a bit below average in the second year.

He was a year older than youngsters Pie Traynor and Kiki Cuyler, who were both trying to make the team in 1921.

He had started pitching at Chilocco Indian School, and then began his professional career in 1920. Kid Elberfeld managed him in 1920 and claimed he was as fast as Walter Johnson.

He developed a drinking problem when he was in the majors. After his playing days, he spent years drifting and drinking until in 1945 he quit drinking. He became a tribal elder, worked for the Ponca City ballclub, and for the Oklahoma State Highway Department.

He became good friends with Rabbit Maranville. However, Maranville was not necessarily a good influence on him as the two liked to pull pranks together, driving manager Bill McKechnie crazy.

There is a story that Ty Cobb was taunting him with racist remarks in an exhibition game until Yellow Horse happened to hit Cobb between the eyes with a pitch.

He was used as the model for the character Yellow Pony in the "Dick Tracy" comic strip by artist Chester Gould, also born on the Pawnee reservation.

See also SABR Biography of Chief Yellowhorse, a main source for this article, and Wikipedia.