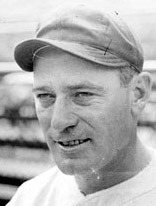 "Ruth did not point at the fence before he swung." - Charlie Root, about his most famous pitch.

One of the top pitchers of the 1920s and 1930s, Charlie Root is the winningest pitcher in Chicago Cubs history but is best remembered for giving up Babe Ruth's called shot home run in the 1932 World Series.

Root quit school when he was only 13 years old and began working by driving a grocery wagon while spending most of his free time playing baseball. He first reached the majors with the St. Louis Browns in 1923, going winless with a 5.70 ERA in 27 outings. Back in the minors, he won more than 20 games in each of the next two seasons with the Los Angeles Angels of the Pacific Coast League. He joined the Cubs in 1926 and led the National League that summer with 17 losses (despite posting 18 wins and a respectable 2.82 ERA). The following year, 1927, he paced the NL with 26 victories in 48 appearances. Overall, he won at least 14 games in his first eight seasons in Chicago.

Root was a key player for the Cubs in four World Series teams: 1929, 1932, 1935, and 1938. However, he found little success in the Fall Classic, going 0-3 with a 6.75 ERA in 6 Series games. He is most remembered for his appearance in Game 3 in 1932. Facing Babe Ruth with an 0-2 count, accounts say Ruth pointed to the centerfield bleachers and then deposited his next pitch in the same spot. Root contended to his dying day that this was not the case; he claims Ruth instead held up his bat to indicate he had one strike left.

Root remained with the Cubs through 1941. The following year, he joined the Hollywood Stars of the PCL, and he was player-manager of the club in 1943 and 1944. He followed that with a two-year stint as player-manager of the Columbus Red Birds. He ended his playing career in 1948, while serving as skipper of the Billings Mustangs. In 1950, he managed the Des Moines Bruins of the Western League, and he was a Cubs coach the next three summers (1951-1953). After managing the Eau Claire Braves in 1954, he was a member of the Milwaukee Braves coaching staff in 1956 and 1957. He was again a Cubs coach in 1960.

Overall, Root won 201 games in the majors, all with the Cubs.