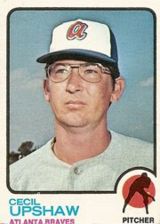 After a promising 1969 season, Cecil Upshaw, the Atlanta Braves' 26-years-young right-handed reliever, known for his unorthodox "submarine" delivery, tore up the ring finger on his pitching hand (at the time, some period accounts reported that he had actually severed it and had it re-attached, when in fact he had severed the nerves and the blood vessels in the finger) on an overhead awning (or was it a drain spout?) while demonstrating imaginary basketball dunks to a group of dinner guests, outside the restaurant where they had just dined. He missed the entire 1970 season (having at least two surgeries and rehabbing) and although he had the best winning percentage season (11-6, .647) upon his return in 1971, he never again had an ERA under 3.00 (due in part to rules changes causing offense to rise). He was a cousin of George Stone.

He saved games for his cousin 12 times in their 5 years as teammates on the Atlanta Braves. Stone saved one of Upshaw's wins.