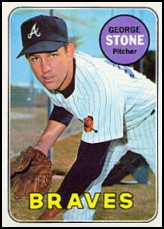 George Stone pitched nine years in the majors, for the Atlanta Braves and New York Mets, most notably in 1973 when he went 12-3 for the Mets and pitched in the 1973 World Series without giving up an earned run. He also won 13 games for Atlanta in 1969, when he was 22.

His cousin Cecil Upshaw saved games for Stone 12 times over their 5 years as teammates on the Atlanta Braves. Stone saved 1 of Upshaw's wins.

He is not to be confused with the other George Stone, who played early in the 20th Century.