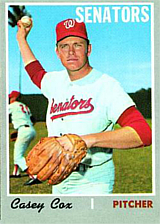 “That’s where he should have been all along, but we needed a starter and he did a good job... Now I’ll say flatly that he is the best right-handed relief pitcher in the league.” - Ted Williams, to The Sporting News, August 14, 1971

Casey Cox pitched eight years in the majors, mostly with the Washington Senators.

Cox, who was born in Long Beach, CA, went to Long Beach City College and California State University, Los Angeles. He was at Cal State L.A. at the same time as Dick Wantz. He signed in 1962 by the Cincinnati Reds and pitched one year in the minors before being drafted away by the Cleveland Indians in the first-year player draft and selected off waivers by the Washington Senators. After going 9-2 in the minors in 1965, he made his major league debut in April 1966.

At the major league level he was primarily a reliever except in 1970. As a rookie, he established bests in appearances (66) and saves (7) with a 3.50 ERA in 113 innings. His best year was in 1969, when, as a reliever and spot starter, he had a record of 12-7, 2.78 with 4 complete games in 52 games (13 starts) and 171 2/3 innings, good enough for sixth in the league in ERA. On July 7th of that season, facing the Cleveland Indians, he entered in the 3rd inning with a 2-1 deficit and retired all 20 batters he faced as the Senators rallied to win, 7-2. He struggled when the team became the Texas Rangers and finished his big league days with 6 appearances for the New York Yankees late in 1972 and in 1973.

He has been named to the Wilson High School Athletics Hall of Fame.