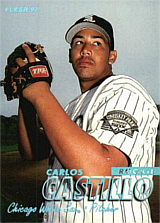 Carlos Castillo was selected by the Chicago White Sox in the third round of the 1994 amateur draft. He played in four major league seasons, three with the White Sox and one with the Boston Red Sox, winning 10 games with a 5.04 ERA. Castillo had a strong arm, but he was of substantial size and appeared to be overweight, making him an easy target for fans' jeers.

Castillo put up strong numbers as a starter early in his minor league career. He pitched in the Rookie League and A ball in his first three professional seasons. In 1997, with only four games above A ball under his belt, Castillo made the White Sox out of spring training. He worked primarily as a long reliever and appeared in 37 games. He finished 2-1 with a 4.48 ERA. In 1998, Castillo continued to pitch as a long reliever for Chicago. He tossed 100 1/3 innings and had a 6-4 record and 5.11 ERA. 1999 was his final season with the White Sox. He pitched in 18 games (2-2, 5.71) and spent most of the season as a starter in Triple A. The big righty moved to the Boston organization in 2001. His two seasons there were highlighted by a two-game stint with the Red Sox, with a 6.00 ERA. Castillo bounced around various professional leagues thereafter, pitching for clubs in Japan, Mexico, Taiwan and the Atlantic League.