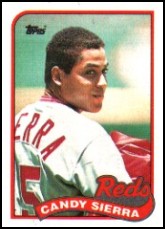 Pitcher Candy Sierra was signed by the San Diego Padres as a 16-year-old in 1983 and made his pro debut that summer with the Spokane Indians, going 1-5 with a 5.35 ERA in 23 games. He was with the Reno Padres the following year, and on June 15th of that season, he threw a 7-inning no-hitter against the Modesto A's. Overall, he had perhaps his best season that year, going 11-4 with a 3.72 ERA in 28 appearances.

Sierra made the Padres' Opening Day roster in 1988 and appeared in 15 games for the club, going 0-1 with a 5.70 ERA. On June 8th, he was traded to the Cincinnati Reds for Dennis Rasmussen. Two days later, he made his final big league appearance, pitching 4 innings against the San Francisco Giants and giving up 2 earned runs while striking out 4. He spent the rest of the year with the AAA Nashville Sounds, going 5-5 in 13 starts.

Candy played for the Santurce Crabbers of the Puerto Rican Winter Baseball League.