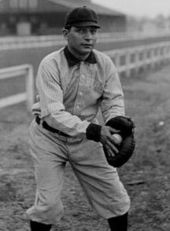 Bruno Block, born James Blochowicz, played five seasons in the majors, mostly for teams in Chicago. He is the earliest major leaguer whose first name is listed as Bruno.

Block, from Wisconsin, played in Texas in 1905-06. He did some pitching in 1906, going 5-2 for Galveston. His major league debut was in August 1907 with the Washington Senators, who also featured a rookie pitcher named Walter Johnson. Johnson made his major league debut three days earlier than Block. Bruno spent 1908-09 in Minneapolis before coming back to the majors in 1910-12 with the Chicago White Sox. In his best year with the bat, he hit .304 in 1911 for a team whose average was .269. Block also spent part of 1912 in the minors with Milwaukee. He came back to the majors in 1914 with the Chicago entry in the Federal League.

After his baseball days, he was a salesman for Miller Brewing Company.