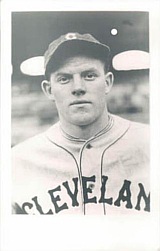 "I always liked baseball better… That’s why I haven’t any plans beyond this season with the Giants... After the football season is over, I’m going to start thinking about the baseball season with the Cleveland Indians… and most of all, I want to make good as a big-league ball player. It’s the game of games for me." - Bruce Caldwell, to the New Haven Journal Courier, 1928

Unfortunately, Rhode Island native Bruce Caldwell would not make good as a professional baseball player. He saw action with both the New York football Giants (as a running back and quarterback) and in baseball with the Cleveland Indians (as an outfielder) in 1928. Surviving statistics from the NFL indicate he did not play that often for the Giants, gaining less than 100 yards on the ground. As an outfielder, he hit .222 with two extra-base hits in 18 games, primarily in right field. He would resurface for 7 more games with the Brooklyn Dodgers in 1932, going 1-for-11 with a single off Fred Frankhouse of the Boston Braves during a doubleheader.

Thankfully, as a Brown and Yale man, he had his education to fall back on without sports glory, graduating from Yale's law school in 1935. He died in 1959 of cancer.