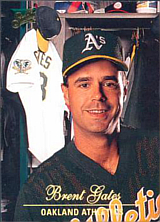 Brent Gates played seven years in the majors with three teams. After his playing days ended, he went on to manage the Class A West Michigan Whitecaps for a year. He is currently an insurance agent in Grand Rapids, MI.

Gates hit .500/.558/.947 with 9 extra-base hits, 10 runs and 11 RBI for Team USA in the 1990 Baseball World Cup. It was not enough to put Team USA in the first division or to put Gates on the tournament All-Star team at either second base or third base. He tied for 4th in average, trailing Orestes Kindelan, Shinichi Sato and Omar Linares. He was with the US for a Bronze in the 1990 Goodwill Games.