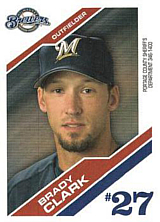 Brady Clark was an outfielder with five teams in a nine-season big league career. His season in the sun was 2005 with the Milwaukee Brewers, batting .306/.372/.426 in 145 games, including a scorching May in which he rapped 45 hits and hit .369. He established personal bests that obliterated his runner-up performances by scoring 94 runs, lacing 183 hits with 31 doubles and 13 home runs. He cashed in with a two-year, $7 million deal as an arbitration-eligible player following the season, then reverted to his normal level of production, finishing his career with a cameo for the New York Mets in 2008.

In 2015, Brady joined the Los Angeles Dodgers as an outfield/baserunning coordinator.