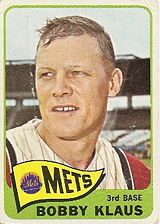 Bobby Klaus is the brother of Billy Klaus.

Klaus made his big league debut for the Cincinnati Reds on April 21, 1964 against Jimmy Wynn and the rest of the Houston Colt .45s as a pinch hitter for pitcher Jim O'Toole. He did not get an official at-bat in his first game, because a runner on base was caught trying to advance. Klaus did poorly as a brief replacement for Pete Rose with the Reds, batting .183 in 40 games. He was purchased by the New York Mets on July 19th of that year, and with them he played in 56 games, compiling a .244 batting average. Overall, in 96 games in his rookie season, he batted .225.

1965 ended up being Klaus' final season in the big leagues. In 119 games with the Mets, he collected 55 hits in 288 at-bats for a .191 batting average. He showed a fair eye at the plate, with his walk total nearly matching his strikeout total - he had 45 and 49 respectively. He played his final big league game on October 3rd against the Philadelphia Phillies. He ended his career on a sour note - he collected no hits in five at bats in his final game.

Klaus was dealt prior to the 1966 season from the Mets along with Wayne Graham and Jimmie Schaffer to the Phillies in exchange for Dick Stuart. He didn't make the big league squad that year, ending up at the Phillies' Pacific Coast League affiliate in San Diego. Klaus was the regular second basemen for the Padres for the next 3 years. He took his plate discipline to another level, going on to lead PCL batters in base on balls all 3 years (1966 - 154 walks, 1967 - 110 walks, 1968 - 107 walks). He concluded his professional baseball career in the minors in 1969.

Using the similarity scores method, he is most similar to John Patterson (through 2019).