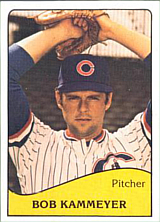 Bob Kammeyer was the 1980 International League Pitcher of the Year, putting together a 15-7 record and 2.92 ERA in 25 starts (with 13 complete games) for the Columbus Clippers. Despite the honor, he chose to retire after the season.

In 1979, he established an MLB record when he surrendered 8 earned runs without a recording an out in his lone appearance of the season for the New York Yankees. The 8 runs are the most by a pitcher to post an ERA of infinity.

Kammeyer died of a pulmonary embolism in January 2003. He was 52.