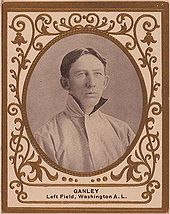 "Bob Ganley covers so much territory for the Athletics that he leaves little for the other outfielders to do." - Sporting Life of August 21, 1909

Bob Ganley played a lot of all three outfield positions during his five years in the majors, appearing with three teams. He went from playing for excellent Pittsburgh Pirates teams in 1905-06 to poor Washington Senators teams in 1907-08 and part of 1909 to an excellent Philadelphia Athletics team for most of 1909.

More than a dozen major leaguers have been born in Lowell, MA, with Ganley the player in the group with the most major league at-bats.

Bob came to the majors at age 30, after a long career in the minors. After his major league days, he again played in the minors. He moved around so much that he was called "the globetrotter of organized baseball". He played for New Haven, Albany, Brockton, Columbus, Toledo, Marion, Schenectady, Kansas City, Milwaukee, Oakland, Johnstown, Des Moines and Newark, and that was just in the minors. He managed the Fredericton Pets in 1913 and the Perth Amboy Pacers in 1914.

This manager's article is missing a managerial chart. To make this person's article more complete, one should be added.
Retrieved from "https://www.baseball-reference.com/bpv/index.php?title=Bob_Ganley&oldid=866768"
Categories: