Bob Fisher played seven seasons in the majors. In his best year, 1918, he played even with the great Rogers Hornsby, which is to say that on the 1918 Cardinals both Fisher, the second baseman, and Hornsby, the shortstop, had OPS+ scores of 136. 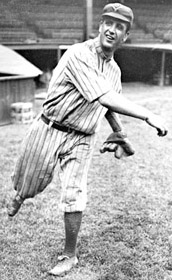 Bob came to the majors in June, 1912 and became a regular at shortstop for the 1912 Dodgers, appearing in 82 games that season for manager Bill Dahlen. In 1913 he continued as a regular under Dahlen, although he was the weakest hitter of the regulars.

Bob spent most of 1914 at Toronto, where he hit over .300 for manager Joe Kelley. He was up for 15 games with the 1914 Cubs, and hit well; h stayed with the team in 1915, also hitting above average for manager Roger Bresnahan.

The Reds bought him after the season and he appeared in 61 games with them in 1916, hitting decently for a shortstop. He also spent time in the minors with Los Angeles in 1916, and then was in the minors all of 1917 with Rochester.

In spite of that, Bob played only three more games in the majors. He did, however, play many more years in the minors through 1926, including in 1921 when he hit .351 for Minneapolis. Another veteran major leaguer, the 36-year-old Sherry Magee, hit .338 for Minneapolis.

He is the brother of Newt Fisher. Newt owned the Nashville team in the early 1900's, but that was before Bob turned professional. Bob did play for Nashville in 1924, two decades later.