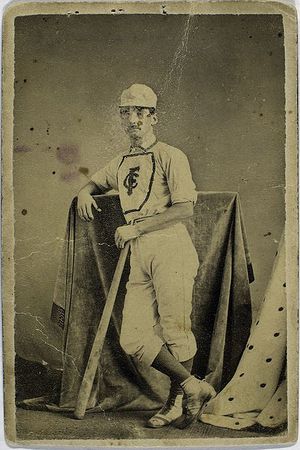 "Bob Addy . . . was a good, hard hustling player, a good base runner and a hard hitter. He was as honest as the day is long and the last that I heard of him he was living out in Oregon, where he was engaged in running a tin shop. He was an odd sort of a genius and quit the game because he thought he could do better at something else." - Cap Anson

Bob Addy was a tough but lovable eccentric who is said to have invented the slide in 1866. Later, he played in the first professional league, the National Association, from 1871 to 1875, and then in the early National League, from 1876 to 1877.

Addy was born in Port Hope, ON, in 1842, then moved at a young age to Rochester, NY. Addy supposedly invented the slide in 1866 with the Rockford Forest City Baseball Club, before any professional leagues had been invented, and before the Cincinnati Red Stockings embarked on their professional barnstorming tours in 1869 and 1870. His invention would have occurred in an amateur game, although at a time when some players were actually paid money under the table. Addy was 21 at the time he first slid. A picture of the 1866 Rockford team shows a 21-year-old Addy who is slender, has a broad face with short hair, and is several inches shorter than Ross Barnes. While with Rockford, he played with distinction against the famous Cincinnati Red Stockings in 1869, to the point that even Cincinnati fans cheered his efforts.

There is no readily available information as to whether Addy had fought in the Civil War, but it seems likely that he did so. If he did, he might well have taught the game to, or learned it from, other soldiers, since baseball was spreading in popularity at the time and was known to have been played by soldiers when they were not fighting.

When the first league was formed in 1871, Addy was there to play on the Rockford Forest Citys. He played every game at second base, along with a young Cap Anson, who was at third base. The team did horribly, going 4-21 and Addy hit .271. He did not play in the National Association in 1872, but in 1873 started with the Philadelphia Whites for 10 games, hitting a decent .314 on a team where Levi Meyerle was the star. In spite of his performance, Addy was cut from the team, and played in some sort of game in Rockford. Later in the season, he played for the Boston Red Stockings, hitting .355 for a team that won the pennant. However, the Whites claimed that Addy was disqualified from playing for Boston because he had played in Rockford, and there was a "60-day rule" that prevented players from jumping. The Association eventually ruled against the Whites, saying the Rockford game was just a pickup game. Never one to stay on one team for long, Bob was on the Hartford Dark Blues in 1874. He posted one of the lowest averages on the team, whose star and manager was Lip Pike. In 1875, he was back in Philly with the Whites, even after the previous controversy. His .258 average was slightly better than the team average of .251, and he managed the team for 5 of their 69 games. Former teammate Levi Meyerle was the star on the team. That year, he worked one game as an umpire on October 28th.

When the National League formed during the winter of 1875-1876, Addy was able to become a player in the new league. He was on the 1876 Chicago White Stockings, which won the first pennant in the new league. Addy had the lowest average on the team, .282, while teammate Ross Barnes led the league at .429. Addy played primarily in the outfield. Moving on to the Cincinnati Reds in 1877, he played his last season at age 35. He was the oldest regulars on the team. Lip Pike managed 14 of the team's games that season, while Addy managed 24 and shortstop Jack Manning managed 20. Levi Meyerle was once again a teammate of Addy.

One of the most similar players to Addy, using the similarity scores method, is "Silk Stockings" Harry Schafer, who was a contemporary.