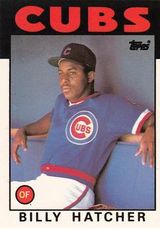 Billy Hatcher was one of the heroes of the Cincinnati Reds' surprise sweep of the Oakland Athletics in the 1990 World Series: he went 7 for 7 in Games 1 and 2, and 9 for 12 overall in the Series, for a record .750 batting average.

After his playing career ended, Hatcher joined the Tampa Bay Devil Rays organization where he spent eight seasons as a coach. He was a coach for the St. Petersburg Devil Rays in 1997. In 2006, he joined the Cincinnati Reds as the team's first base coach. In 2016, he moved across the diamond to the third base coaching job, staying until the end of the 2018 season. In 2020, he was named first base coach of the Miami Marlins, also taking on the responsibilities of outfield coach.

"Things happen when he is on base," - Bill Doran