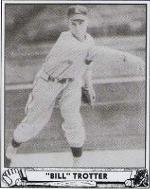 One of the hardest working pitchers in the American League was Bill Trotter of the St. Louis Browns in 1939. Trotter, hurling for a last place club, appeared in 41 games, won 6 and lost 13, not bad considering the Brownies were a hard-luck club that finished with a 43-111 record. Trotter showed excellent control, proven by the fact that he issued only 54 bases on balls in 157 innings and struck out 61. One of his victories included a four-hitter.

Bill spent seven years in the major leagues, five with the Browns and one with the Washington Senators in 1942 and finished out with the St. Louis Cardinals in 1944. His best season came in 1940 with the Browns when he went 7-6 with a 3.77 ERA. Bill wound up his major league time with a 22-34 record with a 5.40 ERA while pitching 483 innings.

Trotter had been in the minors starting in 1929, unattached, until he was signed as an amateur free agent by the St. Louis Browns on April 27, 1937 at the age of 28. He pitched his last game in 1947 for the Beaumont Exporters of the Texas League at the age of 38. Bill also tried his hand at managing in 1949, for at least part of the season, with the Mt. Vernon Kings of the Mississippi-Ohio Valley League. The team finished with a 53-67 record and a seventh place finish.