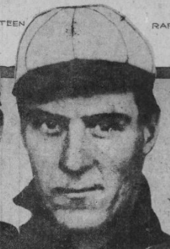 "Bill Steen - if you kids don't recognize the name - was a famous Pacific Coast League pitcher in the early 1900's. In 1910 the Portland team had its terrific trio of Steen, Vean Gregg and Gene Krapp. During one stretch of eight plus games, they pitched 89 scoreless innings. Of that string, Steen claimed 56 scoreless frames." - from Baseball Digest, September 1953

Bill Steen pitched four years in the big leagues, posting a record of 28-32 with 6 saves. He was primarily a starter.

Through 2009 Steen is the last major leaguer to come out of Washington & Jefferson College, where he attended between the years 1906-11. He was there at the same time as Ody Abbott.

Although he attended college during 1906-11, he was also playing pro ball from 1907 on. He won 17 games as a 19-year-old playing for New Castle, and two years later had 18 victories for Bloomington. In 1910-11 he pitched for Portland, getting 27 victories and then 30 victories.

After his major league days he pitched several more seasons in the minors for San Francisco and for Oakland. In a partial season in 1915 he had a 10-5 record with a 1.54 ERA, much better than any other pitcher on the team. In 1916 his 19 wins were second-best on the staff but his ERA wasn't as impressive.

The Baseball Digest article cited above says that his favorite game was the one where he beat Walter Johnson. A line drive broke his finger in the sixth inning but he had it taped and continued to finish the game. At age 65, he was a building engineer at a hotel in San Francisco, CA.