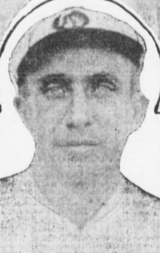 Shipke debuted professionally in 1902 with the Springfield Reds, then spent 1903 with the Fort Scott Giants and 1904 with the Omaha Rangers. In 1905, Bill hit .262/?/.384 with 20 steals, 8 triples and 10 home runs for the Omaha Rourkes. Shipke led the Western League in homers that year and the Spalding Guide said he "attracted the most attention" of any Omaha player other than Jack Pfiester.

Bill was picked up by the Cleveland Naps and played two games for the club in 1906, going 0 for 6. He then joined the Des Moines Champions and played on a victorious team there; Shipke batted .259 and stole 35 bases. Joe Cantillon remarked that he thought Cleveland "would have won the pennant" had they kept Shipke around and instead suffered with the poor performance of Jap Barbeau.

Shipke was the starting third baseman for the 1908 Senators and fielded .932, average for the 1908 AL at the hot corner. He hit .208/.297/.276; as it was the heart of the Deadball Era, his OPS+ was a perfectly respectable 93. He stole 15 bases, hit 8 triples and laid down 26 sacrifice hits. An old Senators fan convinced Bill to paste a piece of paper with "magical properties" to his bat and Shipke had a great month after starting the experiment. After Bob Unglaub joined the Senators, Shipke wound up on the bench. Bill went 2 for 16 with the 1909 Senators to conclude his big-league career with a .199/.280/.261 batting line and a 81 OPS+. Al Pepper notes that "He left the majors with more nicknames than career home runs."