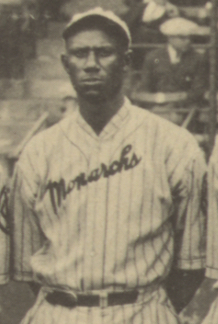 Drake at the 1924 Negro World Series

Bill Drake was a Negro League pitcher for a decade and a half. He is 15th all-time in the Negro Leagues in wins according to John Holway's statistics. Holway credits him with a 99-61 record, which is not reflect below as more recent research into 1921-1923 has reduced his record a bit. He was 0-6 in the postseason and against white major leaguers. He was known for his tendency to use the beanball to ward off hitters, giving him the nickname "Plunk."

Switching to the Kansas City Monarchs, Drake went 6-5 with a 5.72 RA to wrap up the year. Bill would spend five years with the Monarchs, never signing a contract.

Drake bounced around in 1926, going 7-6 for the Indianapolis ABCs and also spending time with the Dayton Marcos and Memphis Red Sox. In 1927, Big Bill had a 11-8 record for the Detroit Stars. He then vanished from black baseball for a couple years, resurfacing briefly for the 1930 St. Louis Stars, winning his lone decision.

Plunk was known for his trick pitches and curveball.

Drake played with white semipro teams in North Dakota during his career but refused to play in the Florida Hotel League due to racial conditions in the South. Later in life, he did take a basketball team to Atlanta, GA to play against black college teams. Bill also refused to play in the Caribbean due to the response Cuban batters in the USA had to his tendency to work inside.

Off the field, Bill had the reputation as a jokester.

Drake did not plan much for his post-baseball life and did not hold a steady job until the 1940s; from age 52 to 62, he worked for Famous & Barr before retiring. He struggled financially due to his lack of planning and sought aid where available, once claiming war service in a pension appeal.