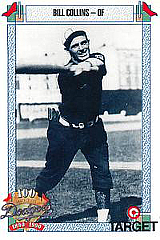 Bill Collins was the first player ever to hit for the "natural cycle", a cycle where the single, double, triple and home run are hit in that order. Bill's big day out came on October 6, 1910, near the end of the season, playing for the Boston Doves against Philadelphia Phillies pitchers Bob Ewing, Charlie Girard and Barney Slaughter. Leading off, Bill finished the day 4-for-6 with 4 RBI and 4 runs scored.

At 28, Bill was the regular left fielder for the Doves in his first season, 1910, appearing in 151 games and batting .241 with 67 runs scored. He had been traded to the Doves by the New York Giants, with whom he did not appear, on April 4th, and ten days later made his major league debut. The Doves, now known as the Boston Rustlers, traded him to the Chicago Cubs when he had a slow start in 1911, seeing action only briefly in three of the next four seasons. Bill also played nine seasons in the minors, including parts of four seasons with the Newark Indians and parts of four seasons with teams based in Cedar Rapids, IA. After his playing career, he was head switchman for Kaiser Steel Corporation at Fontana, California.

Bill is not to be confused with an earlier Bill Collins, typically referred to as "Bill Collins the catcher". Of course, left fielder Bill's major league career was at the same time as another Collins, the famous Eddie Collins, although Eddie played exclusively in the American League while Bill played only in the National and Federal League.