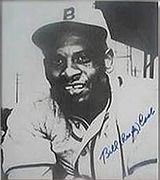 Bill Cash was a Negro League catcher for eight years. He also played one season in the Mexican League and two in the minors.

Cash spent his entire Negro League career with the Philadelphia Stars. He had played for a semipro team run by Webster McDonald, who had recommended Bill to the Stars. He hit .213 as a rookie in 1943, then improved to .296 in 1944 but was back down at .234 in 1945. On Opening Day in 1946, Cash got into an argument with an umpire over a call at the plate; when he got up from his catcher's crouch to make his protest, the umpire got knocked to the ground. Goose Curry ran in and kicked the ump while he was down. For Cash's role in the incident, he was fined $25 and suspended for three days. "Ready" Cash hit .252 in 1946. He was slated to catch for the Satchel Paige All-Stars against the Bob Feller All-Stars that fall but broke his thumb and missed the exhibition.

The Georgia native hit .276 in 1947 and went 0 for 2 against the New York Yankees. That winter, he hit .214 and slugged .290 between Almendares and Marianao of the Cuban Winter League. From 1948-1950, statistics for Cash with Philadelphia are unavailable. He played for the East in both East-West Games of 1948. In the first game, he replaced Louis Louden late in a 3-0 loss and did not bat. In game two, he started and hit 8th for the East. He was 1 for 3 with a run before Louden replaced him in a 6-1 win. In the 1949 East-West Game, he was 1 for 4 with a double as the East's starting backstop and #8 hitter.

From 1953-1955, Bill played in the Dominican League. During his career, he also played in the Venezuelan League and Mexican Pacific League. After his baseball career ended, he was a machinist for Westinghouse and later was a church deacon. He helped found a group called Concerned Black Men that worked with needy kids in Philadelphia. As of 2010, he was still living in Philadelphia.

Cash made the 2006 Special Committee on the Negro Leagues Election's preliminary ballot.