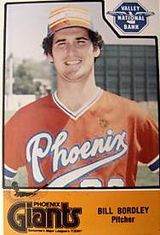 Left-hander Bill Bordley was drafted fourth overall, by the Milwaukee Brewers, in the 1976 amateur draft but did not sign. After earning All-American honors at USC and winning the final game of the 1978 College World Series, he was picked again by the Cincinnati Reds in the January 1979 amateur draft. He requested that the pick be voided and that only teams from his home state of California be allowed to draft him, as his mother was ill at the time and he wanted to remain close by. MLB organized a special draft for his services and the San Francisco Giants selected him. Bill started his professional career straight at Triple A with the Phoenix Giants of the Pacific Coast League, where he went 8-11, 4.56, in 27 games in 1979. In 1980, he was only 4-8, 5.35 at Phoenix, but still got the call to San Francisco in late June, making his debut with a 8-4 win over the Cincinnati Reds on June 30th. He made 8 appearances for the Giants that season, going 2-3, 4.70, but was shut down in early September with an arm injury. He missed all of the 1981 season and, in 1982, he attempted a comeback in the minors but struggled. He went 5-5, 4.71, with poor peripheral numbers, for the Class A Fresno Giants and called it a career, as his arm was nowhere close to what it had once been.

Bordley returned to school and earned a Master's degree from Jacksonville State University. In 1988, he became a Secret Service agent. As a special agent, Bordley worked on task forces and cases targeting electronic crimes, identity theft and Internet fraud. He worked in conjunction with law enforcement and intelligence agencies worldwide and was also assigned to the Presidential Protection Detail for President Bill Clinton. He was the only ex-major leaguer to ever be subpoenaed to testify during an investigation of a sitting United States President, called upon during independent counsel Kenneth Starr's investigation of Clinton's activities with Monica Lewinsky. On October 31, 2011, he was appointed by MLB as its Vice President for Security and Facility Management. In this capacity, he is responsible for establishing and directing all of MLB's security and facility management policies, procedures and programs, working closely with the security and stadium operations personnel of all 30 big league clubs. He also directs security planning for baseball's highest-profile events.