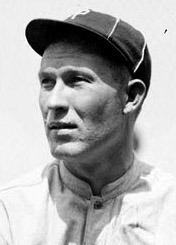 Bert Adams started his professional baseball career in 1909 as an 18-year-old catcher for the Class C Texas League San Antonio Bronchos. Records show he appeared in eleven games but no statistics are available for his performance. In 1910 he appeared with the Class C Southwest Texas League Victoria Rosebuds, catching in 94 games and batting .219. He was called up to the American League Cleveland Naps late in the 1910 season and got into five games, batting .231. He saw time in two games with the 1911 squad, appearing in only two games while spending the majority of this season with the Class A Southern Association Memphis Turtles batting but .191 in 62 games. He played 20 more games in The Show in 1912, batting just .204.

Bert spent 1913 in the Southern Association with the New Orleans Pelicans playing in 75 games and hitting .240. He spent 1914 in the same spot, only this time he hit a robust .292. On January 4, 1915, Adams was traded to the National League Philadelphia Phillies (along with Al Demaree and Milt Stock) for Hans Lobert. He spent the next five seasons with the Phils, 1915 through 1919, which gave him a career total of eight years in the major leagues. Although he was a season long member of the 1915 National League champions, he did not play in the World Series against the American League Boston Red Sox; Boston winning 4 games to 1. Overall, Adams appeared in 267 games, had 678 at bats with 137 hits for a career .202 batting average.

Following 1919, Bert spent the next three years in the Pacific Coast League before calling it a career with the Texas League Dallas Steers in 1923. It must be said that those last four minor league seasons led Adams to a better batting average, as he hit at a .235 pace. In 1922, he was the player/manager of the Pacific Coast League's Seattle Indians, guiding them to a 90-107 record.