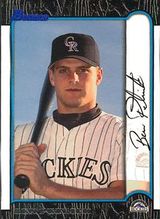 Catcher Ben Petrick played parts of five seasons in the majors before being forced to retire due to Parkinson's disease.

Selected by the Colorado Rockies in the second round of the 1995 amateur draft, Petrick made his pro debut the following year with the Asheville Tourists, hitting .235 with 14 home runs. He reached the AAA level by 1999 and played in the inaugural Futures Game at Fenway Park that summer. He earned a call-up to the majors that September and went on to hit .323 with 4 homers in 19 games for the Rockies.

Following the 1999 season, Petrick experienced the first symptoms of Parkinson's disease, and he was officially diagnosed early the next year. However, he kept his diagnosis from most people and initially maintained his success on the diamond, hitting .322 in 52 games for Colorado in 2000. He became Colorado's primary catcher in 2001 and clubbed 11 home runs for the team, but his average dipped to .238 that year. He was traded to the Detroit Tigers for Adam Bernero in 2003. He played in the San Diego Padres chain in 2004 before retiring. By that point, the symptoms of the disease were quite obvious, with tremors and an inability to throw the ball back to the pitcher being the most obvious.

In December 2009, Petrick underwent a procedure known as Deep Brain Stimulation, hoping to reduce his Parkinson's symptoms. However, an infection following the surgery nearly killed him. He repeated the procedure a year later, and this time it was more successful, with his symptoms being lessened to a large extent.

Petrick was married to Kelley Starkey in 2007 and the couple has two daughters, Makena and Madison. He moved back to his hometown of Hillsboro, OR, where he attended high school (his father was the school's athletics director) and where his wife is a schoolteacher. He wrote a blog and then a book about his experiences, entitled 40,000 to one (the title refers to his experience going from performing before 40,000 fans at Coors Field to performing for his oldest daughter alone (before his second daughter was born). He coached baseball at his alma mater and when a minor league team, the Hillsboro Hops, moved into town in 2013, Petrick was hired as a special consultant, instructing young players about life in professional baseball. He is also a public speaker, telling about coping with the disease.