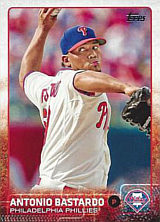 Antonio Bastardo was signed by scout Sal Agostinelli for the Philadelphia Phillies in 2005. He made his pro debut for the DSL Phillies that summer and his big league debut in 2009.

On August 5, 2013, Bastardo accepted a 50-game suspension from MLB as a result of the Biogenesis Laboratories scandal. On December 20, 2014, he was traded to the Pittsburgh Pirates in return for Joely Rodriguez. He had a very solid 2015 season with the Bucs, going 4-1, 2.98 in 66 games with a save as part of an excellent bullpen. In 57 1/3 innings, he allowed only 39 hits and walked 26 while striking out 64. He also pitched a scoreless inning in a losing cause in the Wild Card Game against the Chicago Cubs. He became a free agent after the season and, on January 22, 2016, he signed a two-year contract with the New York Mets for $12 million. After pitching 41 times for the Mets with no decisions and 46 strikeouts in 43 2/3 innings, he was traded back to Pittsburgh on August 1st. Ironically, the player coming the other way was Jon Niese, who was being repatriated by the Mets after four months in Pittsburgh. A year and change after his final big league appearance, Bastardo received a 140 game PED pop after testing positive for stanozolol. He had been released during spring training by Arizona.