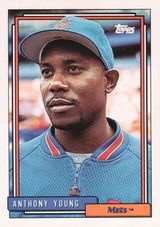 Anthony Young was signed as a 38th round pick in the 1987 amateur draft by the New York Mets and scout Jack Zduriencik. Young had played football (defensive back) in college as well as baseball.

In January 2017, it was announced that Anthony had an inoperable brain tumor. He fell into a coma on June 26th and passed away the next day. He was 51.