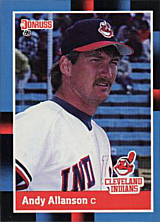 Catcher Andy Allanson found that out the hard way four years ago, after winning a healthy raise through arbitration. After learning of the arbitration award, ex-Orioles general manager Hank Peters, then with Cleveland, left no doubt that the decision cost Allanson his job. 'Andy Allanson's future with the Indians is behind him,' said Peters. Once considered a bright prospect, Allanson did not play in the major leagues in 1990 and has played in only 82 games as an emergency fill-in with the Tigers, Brewers and Giants the past three years." - Jim Henneman, Baltimore Sun, January 23, 1994

Andy Allanson was signed as a 2nd round pick in the 1983 amateur draft by the Cleveland Indians and scout Bobby Malkmus. He was an exceptional defensive receiver with a gun for an arm, sometimes throwing to the bases without standing up. Despite his size and defensive skill, his weak bat prohibited him from becoming a trusted regular.