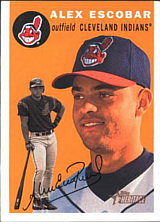 Alex Escobar played four seasons in the majors with three different teams. His last big league action was a robust 33 games with the Washington Nationals in 2006, during which he hit .356 and slugged .575.

Alex missed the entire 2002 season after injuring his knee in spring training. In 2003 and 2004 he played in Triple A for the Indians, logging big league time both years. He was mostly in the minors in 2003, hitting .251 with 24 home runs, while in 2004 most of his playing time was in the majors.

In August 2004, the Chicago White Sox claimed him off waivers, and traded him to the Nationals before the 2005 season. He missed the 2005 season due to a foot injury. He played 35 games at the Double A level in 2006 in addition to his 33 major league games and missed the final month of the season due to a shoulder injury that required surgery. He never returned to the major leagues.

He played five seasons in the Criollitos Independent League.