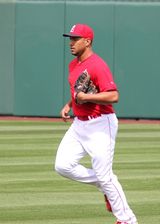 Albert Suarez began his professional career in 2008. His brother Robert Suárez has also pitched in the majors.

His middle name has also been listed as Junior.