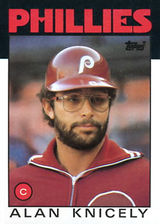 Alan Knicely started his minor league career as a pitcher in 1974, but became a catcher. His brother, Harold Knicely, started his career the same year in the same chain (the Houston Astros) ... as a catcher.

Alan had eight years in the big leagues and 12 in the minors. A couple of times he hit 33 home runs in a season in the minors - on both occasions he finished far ahead of the second-best home run hitter on the team. Most of his major league at-bats were with the Cincinnati Reds, and during some of his time with the Reds, Pete Rose was his manager (and teammate).