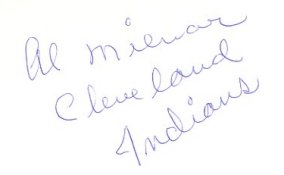 Pitcher Al Milnar is best remembered for giving up the final hit of Joe DiMaggio's record 56 game hitting streak on July 16, 1941. On August 11, 1942, he pitched a 14 inning two-hitter against the Detroit Tigers. His career was interrupted by World War II, serving in the Army from March 1944 to January 1946, and he played in his final big league game in 1946. He managed the New Castle Indians of the Middle Atlantic League in 1951. The unaffiliated team finished in 3rd place with a record of 61-58. After that he went to work for General Motors' Fisher Body Division as a security guard, where he worked for 22 years.