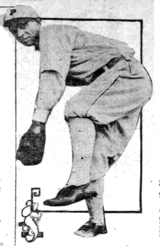 He was long listed with the wrong death date, in [[Milwaukee, WI] in 1950. In fact, research by SABR indicated that he had died five years earlier, in 1945. This discovery also made it possible to correct Klawitter's date of birth.

Through 2019, the only other major leaguer with the same last name has been Tom Klawitter.

"McGraw tried out two of his young twirlers whom he has recently acquired, Drucke and Klawitter. . . Klawitter, who succeeded (Drucke), looked as if he had a good beating coming to him in the seventh inning, but he settled down and pulled out of a nasty fix." - Sporting Life, October 2, 1909, about Al's performance on September 25