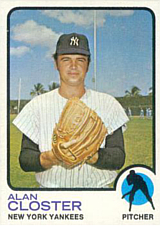 Al Closter's career was adversely affected when he suffered a broken leg in a collision with Dallas Green while in the minors. He pitched parts of four seasons in the majors and eleven in the minors. Most of his big league time came with the New York Yankees, making 16 appearances between 1971 and 1972. In the minors, he spent eight years in AAA ball, six of which were with Syracuse. A member of the demonstration baseball team at the 1964 Olympics, Closter was elected to the Syracuse Baseball Wall of Fame in 2006.