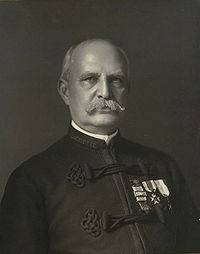 Abraham Mills was the third president of the National League from 1883 to 1884 and was the author of the first National Agreement. He was the President of the Mills Commission, set up to look into the origins of baseball, and which concluded in 1908, on the basis of very flimsy evidence, that Abner Doubleday had invented the game in Cooperstown, NY in 1839, a theory which has been completely debunked since.

While studying at what later became George Washington University in Washington, DC, he was team President and a sometimes player for the Washington Olympics. He then moved to Chicago, IL to practice law, where he wrote an article about the organization of professional baseball that caught the eye of Chicago White Stockings president William Hulbert and whose ideas were used to found the new National League in 1876. He was kept on as legal counsel to the league and in 1883 succeeded the late Hulbert as league president.