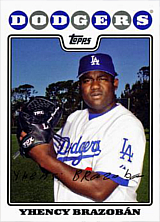 Yhency Brazobán was signed by scout Victor Mata for the New York Yankees in July 1997. He made his pro debut the next summer with the DSL Yankees. Brazobán started his professional career as an outfielder but his cannon arm, as well as his offensive ineptitude, prompted the Yanks to convert him to the mound in 2002. He reached the majors in 2004 with the Los Angeles Dodgers and had a solid first season, going 6-2, 2.48 in 31 games. He pitched 74 times in 2005, but his ERA ballooned to 5.33 and his record fell to 4-10. He did record 21 saves, filling in for an injured Eric Gagné. He only pitched 11 times in the majors over the next 3 seasons, with no record and ERAs of 5.40 or higher each year, as injuries sapped his effectiveness. He also spent time in the minor leagues in 2007 and 2008.

After missing all of 2009, Yhency pitched mostly in the Mexican League in 2010, then finished with the Triple A Buffalo Bisons. In 2011, he began the year in the Texas Rangers organization, going 3-0, 3.42 for the Round Rock Express. As the Rangers were not ready to bring him up to the majors, he asked for his release and signed with the Arizona Diamondbacks on June 2nd. After a few games with the Reno Aces, he made it back to the majors on June 29, 2011. He could not hold on to a job, giving up 4 runs in 6 innings over 6 outings. He finished that season with the Fukuoka SoftBank Hawks of [[Nippon Professional Baseball, having been sold there in July.

In major league history, there has never been another player with the name Yhency or the name Brazobán. However, there have been a few minor league players with the last name of Brazobán: Candy Brazobán, Luis Brazobán, Melvin Brazobán and José Brazobán.