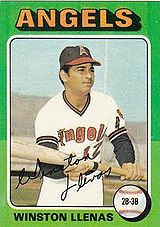 "Your children have Nintendo and Nickelodeon. . . Here we have mainly baseball. I don't know if you can ever comprehend how much this game means to us." - Winston Llenas, interviewed in the book "The Tropic of Baseball: Baseball in the Dominican Republic"

He was one of the early major leaguers from the Dominican Republic, signed in 1961 by the Kansas City Athletics but released in 1962. The Angels then signed him and eventually brought him up in 1968 an 1969, but he was not up to stay until 1972, eleven years after he originally signed to play professional ball.

In 1964 in Single A ball, he hit .346. In 1966 in Double A ball, he hit 25 home runs. In 1970 he led the Pacific Coast League with 108 RBI while playing for the Hawaii Islanders who went 98-48. In 1967 and 1968, he became a respected slugger in the Mexican League with the Charros de Jalisco. After his major league days, he went back to Mexico to play several more seasons. In Dominican League winter ball, Llenas was usually the clean-up hitter and is one of the all-time leaders for the most home runs.

After his playing career ended, Winston Llenas was a Toronto Blue Jays coach in 1988. He was later part-owner of Las Aguilas Cibaenas based in Santiago in the Dominican Republic. He previously served the team as manager, general manager, and team president. He also scouted for the Cleveland Indians, signing Willy Taveras.

His brother Gus Llenas was an infielder in the Philadelphia Phillies chain.