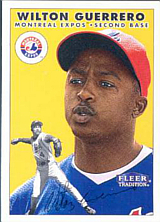 Overshadowed by his Hall of Fame younger brother Vladimir Guerrero, Wilton Guerrero had some talent in his own right. In 2000, he went 13 for 53 (.283) as a pinch hitter, and hit .360 in 6 games as a designated hitter. In the last three games of 2000 in which Wilton hit a home run, Vladimir hit a home run as well.

The two most similar players through 2006, according to the similarity scores method, are Bob Fisher and Mike Sharperson.

OF Gabriel Guerrero, who is a nephew of both Wilton and Vladimir, reached the majors in 2018. Two other brothers, Eleazar Guerrero and Julio Cesar Guerrero played in the minor leagues. Another nephew, Vladimir Guerrero Jr., made his major league debut in 2019 and quickly became a big star, and his younger brother Pablo Guerrero signed his first pro contract in 2023; both are Vladimir's sons. Three other nephews have also either been signed by major league teams or are considered top-rank amateur prospects in the Dominican Republic. One of Wilton's major activities after retiring as a player has been to run the Guerrero Family Baseball Academy, set up by his brother Vladimir in the Dominican Republic. Newphew Pablo was one of the Academy's first pupils to turn pro.