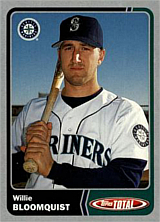 Willie Bloomquist was the prototypical utility player, playing at least 45 games at every position except pitcher and catcher in a fourteen year career. Seeing time in 1,055 games, he saw action as a quasi-regular just once, batting .265 in 125 games for the 2009 Kansas City Royals while logging double digit starts at second base, shortstop and center and right field. In international play, he hit .389/.421/.778 for the USA national team in the 1998 Baseball World Cup, finishing as one of the top two US hitters.

Following his playing days, Willie and former teammate/good friend Jason Kendall together mounted a bid to represent the United States in the 2018 Olympics in two-man bobsled, ultimately falling short. In 2018, the Arizona Diamondbacks dedicated "Willie Bloomquist Field" in his honor in Tempe, AZ. It was one of a number of youth fields built by the Diamondbacks foundation in the state.

Bloomquist was a special assistant to the president of the Arizona Diamondbacks from 2017-2021. He was named head coach of Arizona State University for 2022.