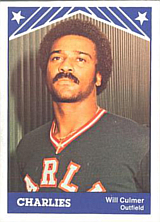 Outfielder Wil Culmer hit .369 with the Peninsula Pilots in 1980 to win the Carolina League batting title. He also hit 18 homers for the club. The Philadelphia Phillies traded him, along with Jerry Reed and Roy Smith, to the Cleveland Indians at the end of the 1982 season. They received John Denny in return, who helped them win the 1983 National League pennant.

Culmer had a cup of coffee in the majors with the Indians in early 1983. He was sent down to Triple A in May, and though he was recalled in September, he did not get into another game.

Known as "Sudgy" at home, he was the fifth of six major-leaguers to date from the Bahamas. The gap between him and Antoan Richardson, the next player from the country to play in the majors, was more than 28 years - Richardson's mother was expecting her baby when Culmer's action with the Tribe ended. Culmer died of a hypertensive cerebral hemorrhage in 2003.