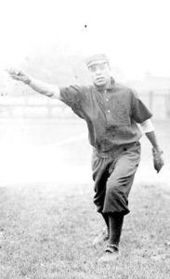 Walter Ball was a top Negro League pitcher in the first decade of the 20th Century. He was noted for his spitball. Off the field, he dressed to the nines, wearing tailored suits. Records are sparse for him given the era in which he played.

Ball debuted in 1893 with the Young Cyclones of St. Paul, Minnesota. In 1899, he pitched for Grand Forks, ND in the Red River Valley League, winning 25 games in 28 appearances. He pitched for Lakota and York in North Dakota in 1901. In 1902, he moved to St. Cloud, MN and helped them win the eastern Minnesota title.

In 1903, Ball joined his first black team, having previously played on integrated nines. He was with the Chicago Union Giants that year, then moved to the Brooklyn Royal Giants in 1904. In 1905, he was with Chicago once more. He also made history in 1905 when he beat the Brooklyn Superbas 7-2, the first time a black team had ever topped a white MLB team.

Ball was with the Chicago Giants and hit .359 before injuring his knee; yhe was 0-1 against other top black teams. In 1910-1911, Ball was with Club Fé for the third time. He hit .211 and posted a 2-8 ledger but the team's other pitchers went 0-15 for the cellar dwellers. He also spent part of the winter in the California Winter League, hitting .233 as a right fielder but not pitching.

The right-hander switched to the New York Lincoln Giants in 1914 before returning to the Chicago American Giants for 1915. In 1917, Ball went to the Chicago Giants and went 0-1; he spent his next four years with the club as they fell to second-tier status.

Ball later coached for the West in the 1936 East-West Game. He was proposed as a Hall of Fame candidate in 2006 but failed to make the first round of cuts by the Negro Leagues Special Committee.

This biographical article is missing the person's: height weight
Retrieved from "https://www.baseball-reference.com/bpv/index.php?title=Walter_Ball&oldid=1138715"
Categories: