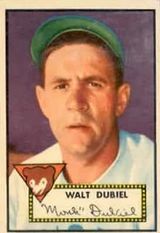 Before the 1941 season Monk Dubiel was signed by the New York Yankees as an amateur free agent. "Monk" spent 1941 with the class C Akron Yankees and the Erie Sailors and the righthander appeared in a combined 28 games; he went 14-8 for a 2.44 ERA. Dubiel came by the name of "Monk" in his first year of pro ball in the minor leagues when a teammate noted that his uniform was so small for him that he looked like an organ grinder's monkey.

After winning 16 games in the International League for the Newark Bears, including a no-hitter over the Syracuse Chiefs in 1943, "Monk" became a dependable war-time hurler for the New York Yankees, winning a career high 13 games in 1944 and 10 in 1945. It should be noted here that Dubiel's career was hindered by a recurring hip and back ailment that kept him from serving in the Military during World War II.

After his baseball career, he worked for Rockwell Manufacturing Company and as a postman for the Hartford post office.