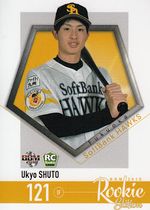 He then played for the Gigantes de Carolina in the Puerto Rican Winter League, batting .304/.361/.304 in 63 plate appearances, backing up Isan Diaz at 2B and Yusuke Masago in LF. He made it to the Hawks' big club for 2019, often being used as a pinch-runner and defensive substitute in the outfield. In fact, he got his first steal in the Pacific League before he got an at-bat. His first hit was a homer, off Hayato Takagi, but it was his only dinger of the year. [4] He finished with a batting line of .196/.212/.294 in 114 plate appearances over 102 games. He stole 25 bases in 30 attempts. He fielded .969 in the outfield and saw limited action at 2B and 3B. Despite being a bench player, the speedster was 5th in the PL in swipes, between Takashi Ogino and Shuta Tonosaki. He was 0 for 1 when the Hawks won the 2019 Japan Series but scored twice. [5]

The Ota native then made Japan's team for the 2019 Premier 12, clearly for use as a pinch-runner given his offensive statistics and bench role over the summer. He did not bat but got four steals in four tries and three runs in seven games. In fact, he led the event in steals despite not getting a plate appearance, edging Min-woo Park by one swipe. Japan won the tournament. [6]

In 2020, he set a NPB record with steals in 12 straight games, breaking the record held by Yutaka Fukumoto.