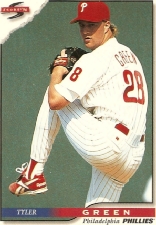 The son of ex-pro football player Charles Green, Tyler Green was drafted in the first round of the 1991 amateur draft, 10th overall. He never quite lived up to his first round status, partly because he was hampered by shoulder and elbow problems the first three years of his pro career. Overall, he had a career record of 18-25 with an ERA well over 5.

On his fourth start of the 1995 season, pitching for the Philadelphia Phillies, wielding a knuckle-curve, fastball and changeup, he gained his first Major League victory, starting a four-game winning streak. His record at the All-Star break (8-4 with 2 shutouts) was good enough to earn him a spot in the All-Star Game, where he pitched in the 5th inning, giving up no runs. He did not fare too well after the break - he lost 5 straight decisions, finishing the season with an 8 and 9 record.

Green was on the US team that won the 1988 World Junior Championship.