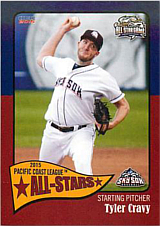 "It would just be nice to have the honesty straight up front instead of, 'Hey, you're competing for a job,' then literally out-compete everyone and be told, 'Sorry, we have other plans... It says a lot about the integrity, or lack thereof, of the guys running the show, but what are you going to do? All you can do is put up numbers and sometimes that's still not enough. I don't think they would release me. I think it would just be me deciding to quit if I chose that route. I'm just not sure I want to play for guys who treat you like this." - Tyler Cravy, to the Milwaukee Journal-Sentinel, April 1, 2017

Pitcher Tyler Cravy made 34 appearances with the Milwaukee Brewers between 2015 and 2016. He torpedoed his big league career with harsh criticism of David Stearns and the Brewer front office after being the final cut in spring training 2017, ending his career in independent ball one season later. At the time of his retirement, he was one of just four pitchers in history to have at least nine career decisions and no wins (0-9, 4.56). The others were Terry Felton (0-16), Steve Gerkin (0-12) and William Stecher (0-10).