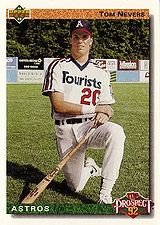 Shortstop Tom Nevers was selected by the Houston Astros in the first round of the 1990 amateur draft.

In the late 1980s Tom Nevers was one of the top high school athletes while playing for the Edina Hornets from 1987-1990. During his 1989-90 senior year Nevers batted over .500. He also played hockey under legendary coach Willard Ikola, a member of the US Hockey Hall of Fame. In the 9th grade Nevers led his team to the state hockey tournament and in his junior year he was one of the stars of the Edina team that won in the hockey state tournament championship. [1] Nevers was the 1989-1990 Minneapolis Star and Tribune Metro Player of the Year in baseball, a Mr. Hockey of Minnesota finalist, and a high school All-American. Nevers hit .300 with 5 walks, 5 RBI and 6 runs in 7 games as the US shortstop in the 1989 World Junior Championship when they won Silver. He outhit several future major leaguers. Nevers was drafted in the first round by the Houston Astros baseball team in the 1990, as well as being drafted by the Pittsburgh Penguins of the NHL. Nevers turned down a scholarship to play baseball and hockey at the University of Minnesota to sign with the Astros. Nevers never made it to the big leagues, but he did play 13 years of minor-league baseball before announcing his retirement at the conclusion of the 2002 season. In between minor league baseball seasons Nevers enrolled at the University of Minnesota where he played on the Gophers' Hockey Team. Nevers was elected to the Edina Athletic Hall of Fame as a member of the Class of 2003. Nevers is related to Pro Football Hall of Fame member and baseball major leaguer Ernie Nevers. Nevers’ father, Gordie Nevers, was a minor league pitcher in the Kansas City A's organization. [1]

Nevers and his wife, Stacy, live in Chanhassen, Minnesota and work together in the real estate business. They have a son, Mason.