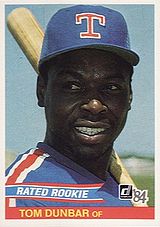 Outfielder Tommy Dunbar played a dozen years in the minors and parts of several seasons in the majors for the Texas Rangers.

With the Tulsa Drillers in 1982, Dunbar hit .323 with 16 home runs and joined Darryl Strawberry as a Texas League All-Star. The following September, he earned a call up with Texas and got into 12 late season games. He had his finest minor league campaign the next year with the Oklahoma City 89ers, hitting .337 to lead the American Association.

Dunbar played a total of 91 major league games, in which he hit .231 with 3 home runs and 31 RBI, striking out 32 times and walking 23. In the field, he committed 4 errors for a .929 fielding percentage - which is not too great for an outfielder. Dunbar was a part of the Rangers losing a perfect game on September 30th, 1984, going 0-for-3 against California Angels pitcher Mike Witt. Perhaps it was his unlucky number that made his major league career so short; he wore 13 throughout his entire big league career.

After making his last major league appearance with the Rangers in 1985, Dunbar continued to play in the minors through 1991, mostly at the Triple A level. In 1992, he hit .250/.422/.476 for Calze Verdi Casalecchio in Serie A1. Following his playing days, he managed the Princeton Reds in 1993 and coached the Chattanooga Lookouts in 1994.

While recuperating from surgery for prostate cancer, Dunbar passed away in March 2011. He was 51.