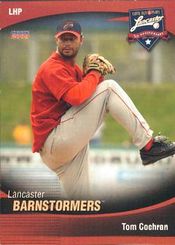 Tom Cochran was an 18th round draft pick of the Boston Red Sox in 2003. He spent two undistinguished seasons in Class A ball and then played from 2005 through 2008 in independent leagues. The Cincinnati Reds brought him into their organization in 2009, and the lefty began to climb to higher levels.

Near the end of May 2011, Cincinnati called Cochran (then aged 28) to the majors for the first time. He was up for less than a week, though, and did not get into a game before he was designated for assignment. The Reds promoted Chad Reineke to take Cochran's place.

Cochran joined the Philadelphia Phillies chain in 2012. That June 27th, he had an outside chance of an emergency start in the majors when the Phillies rotation was in flux after a rainout. Cochran was due to start that day for the Lehigh Valley IronPigs and might have been called up to pitch at Citizens Bank Park instead. The front office decided against a one-day promotion for Cochran or any other minor leaguer. Instead, the Phillies decided to use a succession of relievers and lost to the Pittsburgh Pirates, 11-7.

Cochran continued to pitch in 2013, without much success. Toward the end of the season, Lehigh Valley placed him on the suspended list when he reportedly refused to report to the Double-A Reading Fightin' Phils. Cochran became a free agent in November 2013. His chances of returning to the majors and shedding the "phantom major leaguer" label were not especially bright. Indeed, Cochran's pro career ended after three games in Venezuelan winter ball in the 2013-14 season.